Mushroom hunting has been the impetus for a lot of our hiking lately. This has taken us from New Hampshire to Maine, and the mushrooms from the forest floor to the table. Chanterelles, a favorite in France, have a delicate, creamy and earthy flavor and a wonderful texture. Lightly fry them in butter and voila! you’ve got a sublime side dish! Mandy learned how to identify these lately, expanding her knowledge from the Shaggy Manes we found in Oregon. We’ve found up to 2 pounds of the beauties in a single hike. When you know what you’re looking for they seem to appear everywhere. BUT, you have to be very careful. The false chanterelles can be dangerous. I won’t get into the differences here, but before you go hunting get some training from an expert mushroom hunter.

Maine and New Hampshire have been getting plenty of rain lately, which has lead to swollen stream crossings and muddy conditions, but this has also of course given rise to so many different types of mushrooms in the forest. Most of them scream “I’m poisonous!”, but we are anxious to know more of the edible or even medicinal varieties. Speaking of mud, many of the trail builders/maintainers have made an attempt to get you over the muddiest areas, as seen in the photo below: 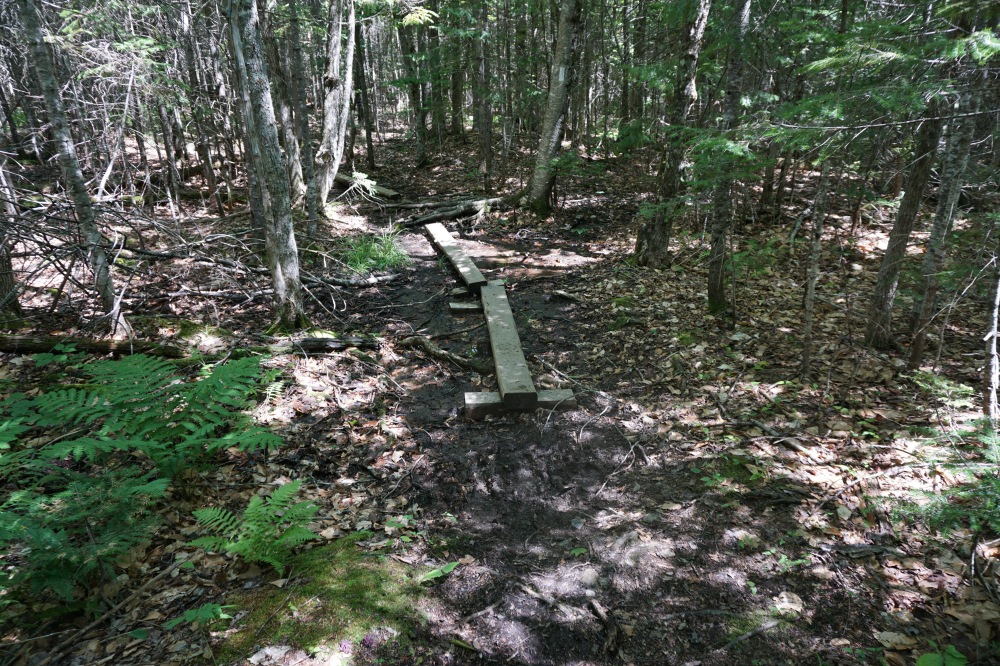 It is very nice to find the rocks, logs and even small bridges to make going though the mud easier, but some places you just have to plow straight through the mud itself. Your boots may be a muddy mess by day’s end, but it will usually dry up and flake off. We have been doing small sections of the Appalachian Trail, as it snakes through our neck of the woods. The longest section so far was 8 miles near Monson, ME. The AT is marked by the characteristic “white blaze,” which occurs every 200 yards or so. Needless to say, there are thousands of these blazes, and they get repainted every year, which is an undertaking handled by volunteers with each of the local Appalachian Trail chapters.

The 8 miles we hiked in Maine was at the start or the end, depending on which direction you are hiking (“Nobo” or “Sobo), of the infamous 100-mile wilderness. Nobo hikers have already come over 2000 miles, if they are through-hikers, once they reach the 100-mile wilderness. The wilderness is an arduous undertaking, mostly because you have to carry 7-10 days worth of food on your back. That is, unless you can arrange a “food-drop” at one of the few forest service roads that come close to the trail. Otherwise you are on your own, and you’d better be well-prepared, for the wilderness is unforgiving.  This sign appears at the start of the wilderness:

The A.T. really varies in its terrain and under-footing. Maine is known for its rocks and roots (and mud), which can be treacherous, especially after a rain. Pennsylvania on the other hand is known for pointy rocks almost the entire span of the state that make for slow-going. Here’s an example of rocks and roots, and boulders that require scaling:

Our son Levar makes the scaling of the big boulder look easy, as he hops up the face of it like a mountain goat, but for someone older or not as tall, it’s a challenge. You definitely get a workout in muscle groups that don’t normally get a workout, which leaves you feeling achy but satisfied the next day. The mountains have always been where I go for solace and an awakening of my soul and opening of my heart chakra. I always feel like that part of me is wide open after a “mountaintop” experience, but increasingly I find the same in the deep forest. Living in New Hampshire for the summer and fall, I get the best of both worlds. It only takes me an hour or two in the forest to feel my stress melting away, my nerves calming, my body relaxing, and suddenly I find that I am “in the zone” or “in the flow” of the Universe.

The trail is full of rewards for all the hard work; be it a salamander in a shallow pond, a rewarding sunrise or sunset, a view from a high ledge or simply the grand silence that envelopes you in the deep forest.

One of the most rewarding hikes we’ve taken lately was up to Lonesome Lake via the Cascade Trail. This is one of the many, many trails in the Franconia Notch section of the White Mountains National Forest. It is a steep climb. Again, lots of rocks to contend with, but the view of 4,000 foot Cannon Mountain looming over Lonesome Lake is wonderful. There is an AT Hiker’s Hostel there known as the Lonesome Lake Lodge. Even non-AT hikers can get a hot cup of tea and a cookie-and those were great to have on a coldish June day, enjoyed from inside the safety of the dining room, with the cold winds whipping across the lake outdoors. 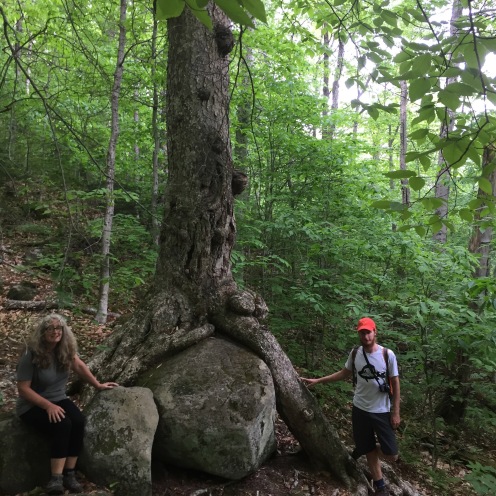 And our days have featured some glimpses of nature of the living, breathing, furry kind as well. Thankfully these encounters have been from the safety of the car, not on the trail. The two bears we’ve seen have escaped the camera lens, but the moose was standing in the middle of the road, so I had plenty of time to snap her picture.

The rivers have been fantastic to watch swell and recede with the coming and going of the rains. We’ve spotted many a cairn on a boulder in the river, only to have it apparently swept away next time we happen by. Some of the trail creek crossings would be impassable after a heavy rain. Even when the water is low though and the rocks are slippery, a steady helping hand is a welcome thing:

There is a famous spot on the Pemigewasset River in Franconia Notch called “The Basin.” Upon seeing the Basin for the first time in September of 1839, Henry David Thoreau called it “perhaps the most remarkable curiosity of its kind in New England.” Similarly, Samuel Eastman described The Basin to early American travelers as, “One of the beautiful haunts of Nature, a luxurious and delicious bath fit for the ablutions of a goddess.” 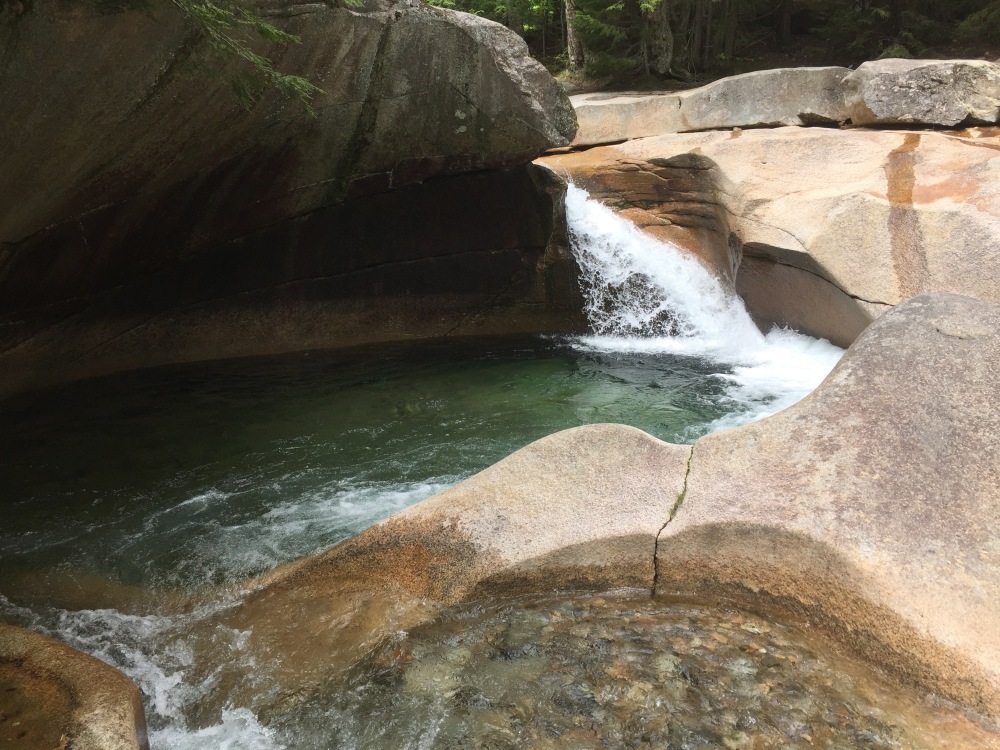 Inside Franconia Notch is another treat, “The Flume Gorge” is on the opposite site of I-93 from the Basin. Here you will find a variety of geologic wonders. Visitors make their way up a narrow slot canyon via a cantilevered system of stairs and walkways. A large waterfall is the reward at the top of the climb. A little further up is a covered bridge that was constructed atop a single massive white oak tree, hewn into a beam, that fell in the 1939 hurricane. 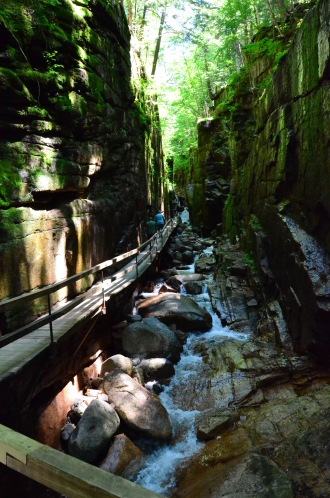 The furthest north we’ve ventured is to Acadia National Park on Mt. Desert Island, which juts out into the Atlantic Ocean from the coast of Maine. The weather the day we hiked the coast was rather dreary so I don’t have any photographs of the ocean, but the next day was glorious and we could see all the way from the top of Cadillac Mountain to Mt. Katahadin, some 100 miles distant:

I will close with our hike up Welch-Dickey Mountains and to Indian Head on Mt. Pemigewasset. I am also including a Pink Lady Slipper orchid, which bloomed all throughout June and the infamous cairn of blueberry pancakes, which appear regularly at Shaw’s Hiker Hostel, in Monson, Maine.