During his winter visit to Oregon, our son decided to hike the Appalachian Trail, a 2,185 mile proposition. The logical time to start was around March 15th, as a hiker must reach Mt. Katahdin, Maine by October 15th, when Baxter State Park closes for the winter. Mandy and I decided that we would take him to the start of the trail at Springer Mountain, Georgia, to see him off properly. The motto on the plaque says, “a footpath for those who seek fellowship with the Wilderness.” There couldn’t be a better reason for undertaking such a commitment.

We struck out from Texas on March 11th, bound for Georgia, with the Airstream in tow. We set up camp at the Plum Nelly campground in Ellijay, Georgia upon our arrival on March 13th. Levar was ready to hit the trail on the 14th, but the first thing one must do is register as a thru-hiker at Amicalola Falls State Park. Levar was the 658th person to register this year, so he was bound to have some company on the trail. Upon registering, it is traditional to weigh one’s pack and have one’s picture taken at the arch marking the start of the Approach Trail. 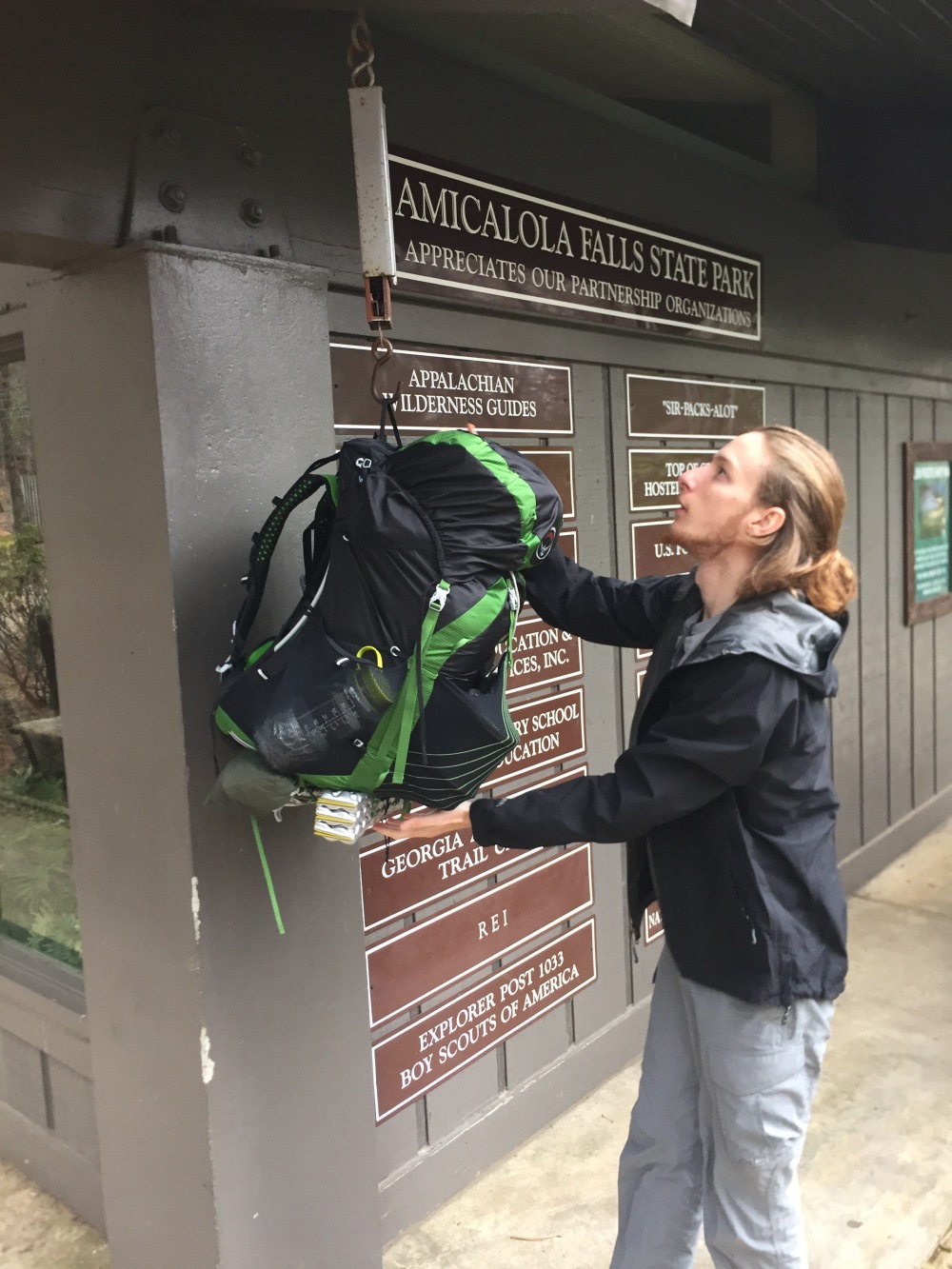 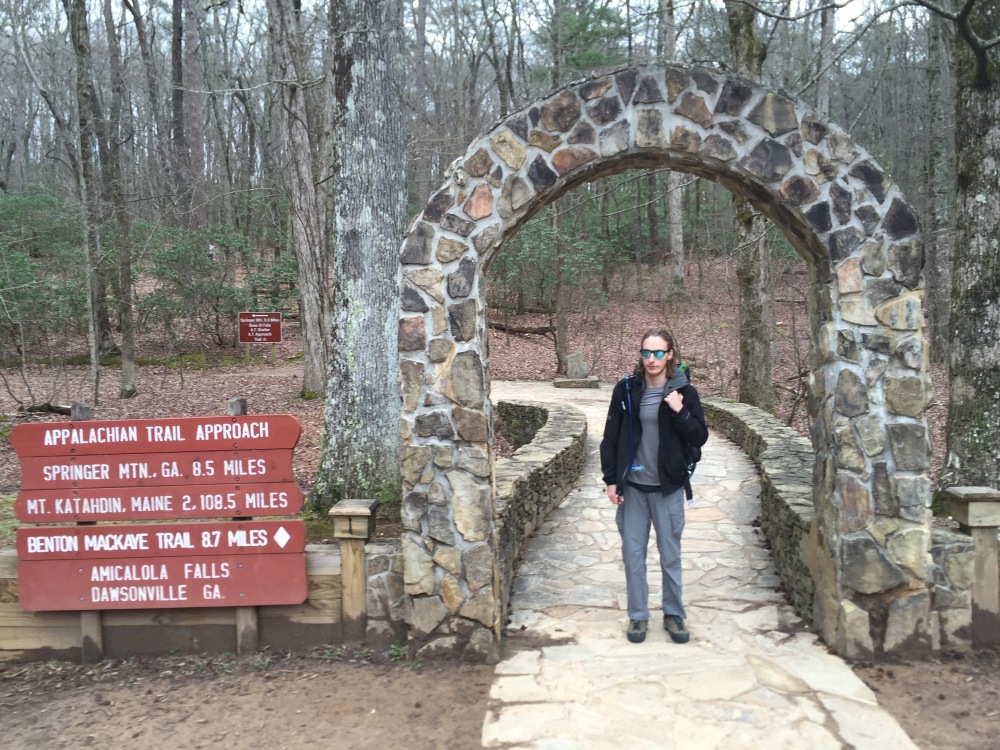 Despite all the careful research, planning and paring down, Levar’s pack still weighed in at 41 pounds! Packs these days can weigh anywhere from 25 to 75 pounds, depending on how much food and water one carries. Rather than carrying weeks worth of food, as one must do on the Pacific Crest Trail or the Continental Divide trail, as resupply points are so far apart, Levar decided to carry 4 to 5 days worth of food to lighten his load, as towns are closer together on the Appalachian Trail. He also carried a good water filter, to resupply water at the many creeks and springs one encounters on the trail. As you can see from the sign above, the Approach Trail to Springer Mountain, the official southern terminus of the trail, adds an unnecessary 8.5 miles over 1,000 feet of vertical climb up steep terrain to the trek. We found out that we could get close to Springer Mountain on Forest Service roads, so took Levar to within 1 1/2 mile of the summit. We hiked with Levar to Springer Mountain. There we found a group of other beginners, a notebook to sign, and a copper plaque marking the start of the trail.

Learn more about the origins of the trial here: How the Appalachian trail got its start. After Springer Mountain, we saw Levar off with some pictures to mark the occasion. Note the white blaze on the tree. There are several thousand of these trail markers on trees and rocks, so one can be assured one is on the right path.

While Levar made time on the trail, Mandy and I hiked some other sections of the trail and some surrounding trails, before meeting at the highest point on the Georgia section of the trail, Blood Mountain, on March 17th. We approached from the north while Levar approached from the south and we reached the summit almost simultaneously. A gracious CCC-built shelter is built into the rocks on the summit. The CCC, Roosevelt’s New Deal Civilian Conservation Corps, were responsible for the construction of many segments of the footpath and shelters: 75th anniversary of the AT. 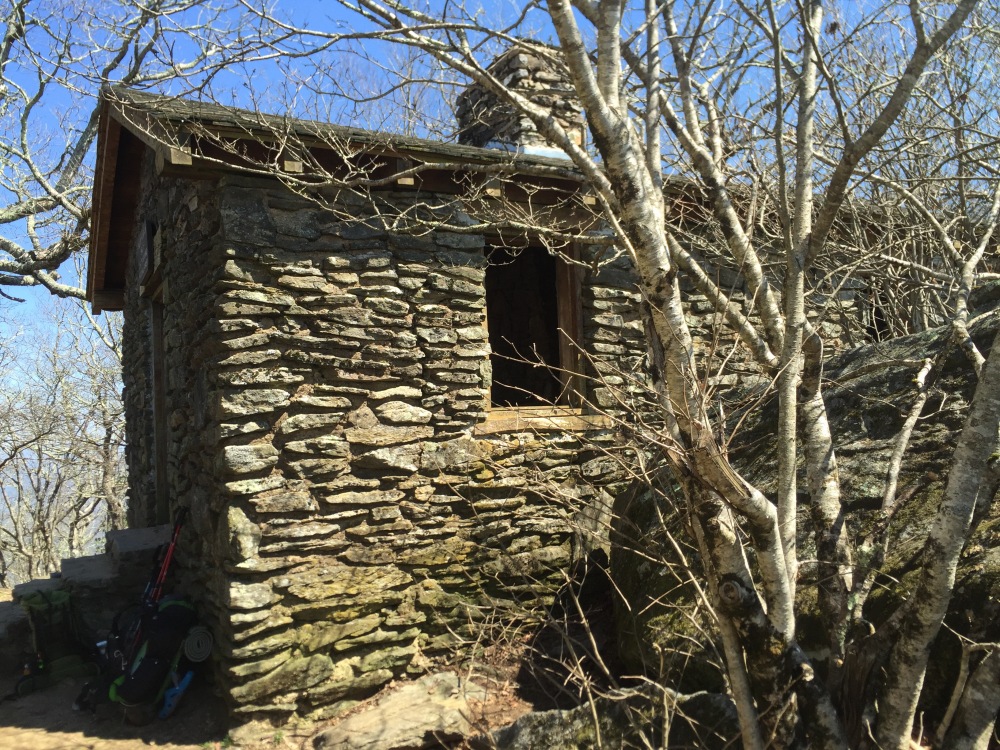 Levar was in excellent spirits and physical condition, and was going strong for these first 30 miles of the trail. We relaxed awhile on Blood Mountain and took in the spectacular views. One really gets a sense of why these mountains are called the Blue Ridge.

After descending from Blood Mountain, the footpath passes, quite literally, through Mountain Crossings at Neels Gap. This is the only spot on the trail where the trial passes under a roof: Mountain Crossings. This building was also built by the CCC, in 1937. It serves as the first contact with the outside world, a way station of sorts, a hostel and a place for a warm shower. The folks at Mountain Crossings offer a free service to thru-hikers: the pack “shakedown”. Levar decided to take part in this service. Staff have you take everything out of your pack and lay it out on the floor. Then comes the discussion about what ought to be jettisoned and what should stay. Thru-hikers send pounds of equipment either home or forward on the trail to save weight. Levar was told that he should do away with his sound-recording equipment and some other things, so these were sent ahead so that once he incorporates them in his pack again, he’ll be physically better able to handle the weight. 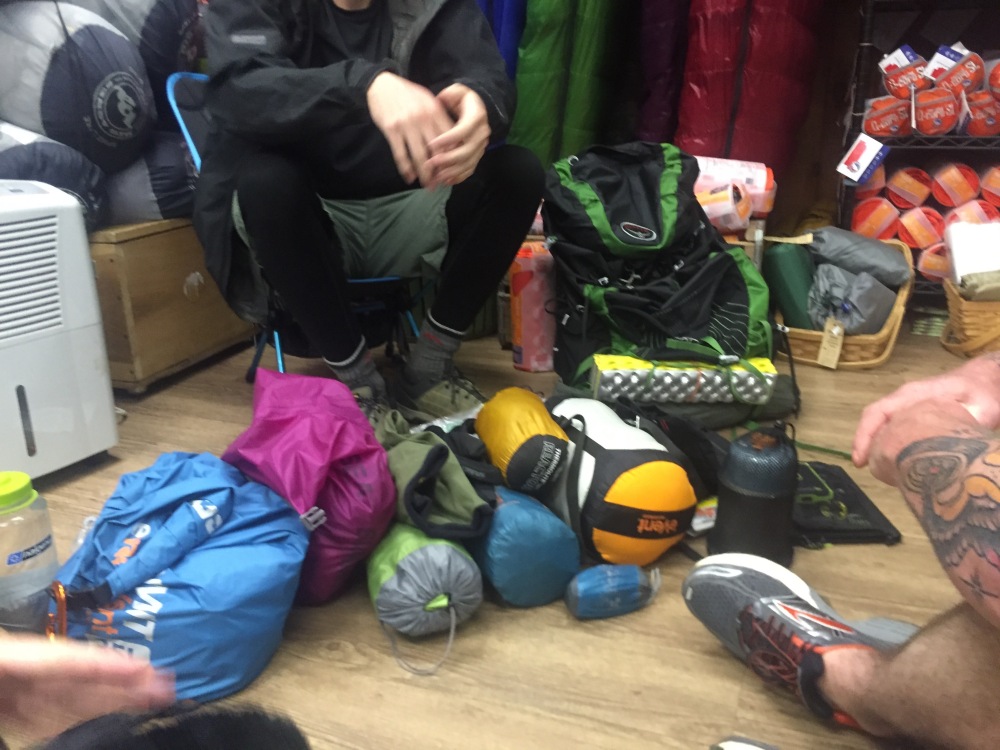 After a hike to the next mountain after Neels Gap, we finally parted ways with Levar. As of this writing he is hiking through the Great Smokies National Park on the Tennessee/North Carolina border.  I am posting this sunset photograph as a token of one of the many rewards of hiking the Appalachian Trail.