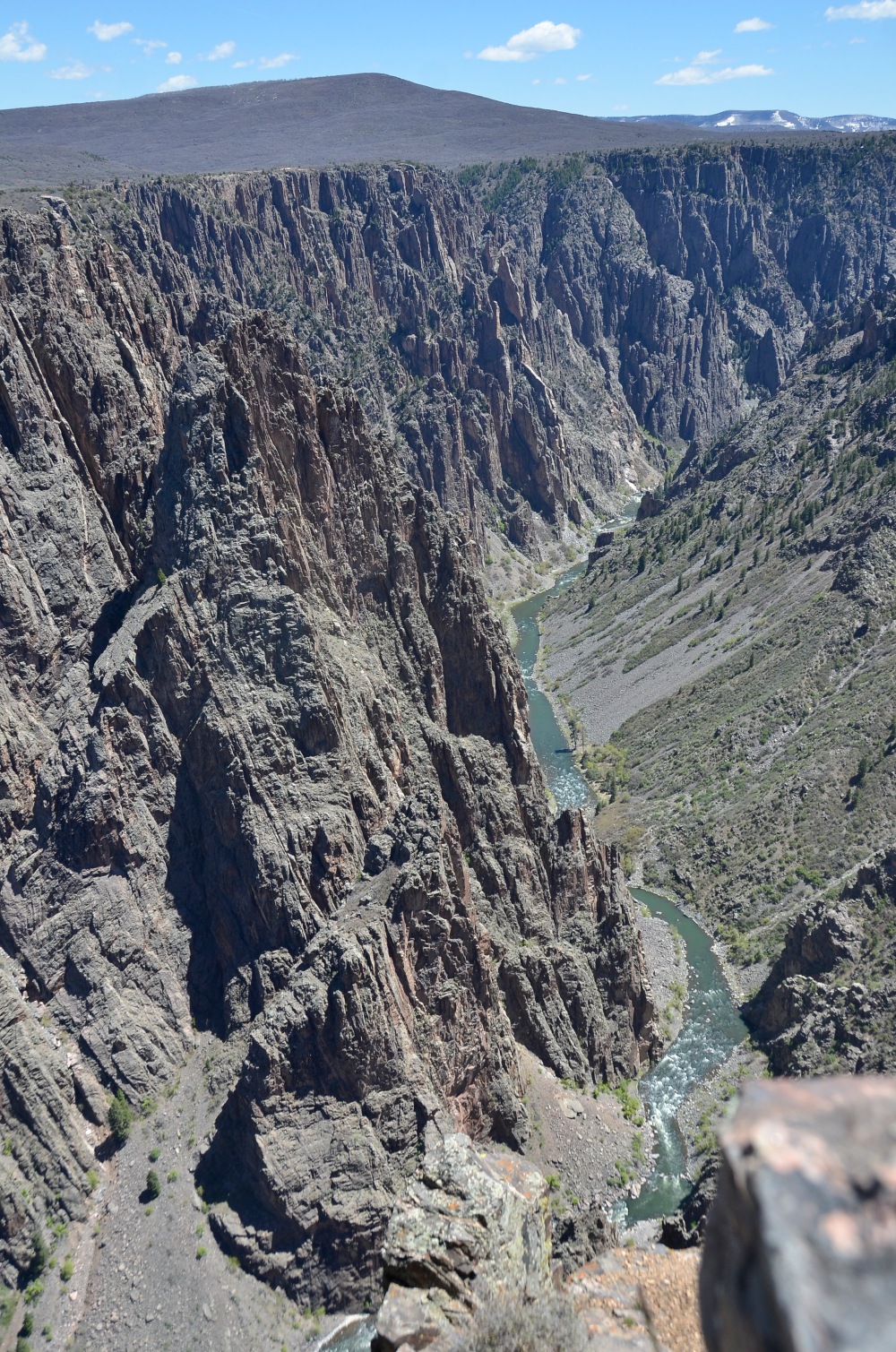 Most of the trails above 9,000 feet are still snowbound now, in early May in Colorado. So, on our two days off this week we chose to visit the nearby Black Canyon of the Gunnison National Park, which lies about 15 miles to the northeast of Montrose, and a 45-minute drive from our home-base, Ridgway State Park. I had vague memories of visiting as a kid, but it was during this visit that I really came to love and appreciate it. I would say, for the reasons I outline below, that I enjoy the Black Canyon even more than the Grand Canyon, and that’s saying a lot!

The Black Canyon was formed over the last 2 million years as the rapidly falling Gunnison River cut its way through some very old Precambrian metamorphic rock that was in place some 1.7 billion years ago. The river falls an average of 96 feet per mile in the National Park, so it is that action along with the turbidity of the water that cut the canyon so deep and so narrow. There is a nice rim road on the south side of the canyon which has numerous overlooks reached by short trails. From almost everywhere along the rim one can hear the roar of the Gunnison, at work below. I don’t recall being able to actually hear the Colorado rushing through the Grand Canyon, although one can see it in places. For me, the scale of the Grand Canyon is too overwhelming and therefore hard to put into perspective. The Black Canyon, on the other hand, can be taken in and understood on a much more intimate scale.

In the book, Images of America: The Black Canyon of the Gunnison, author Duane Vandenbusche states, “Several canyons of the American West are longer and some are deeper, but none combines the depth, sheerness, narrowness, darkness, and dread of the Black Canyon.” I would have to agree with that statement. A singular rock face, the Painted Wall, is roughly 1,700 feet high. The canyon itself averages 2,000 feet in depth. At its narrowest it is 1,000 feet across at the top and only 40 feet across at the bottom. In some places light may only reach the bottom for 30 minutes per day, thus the canyon’s name.

All in all, we found the Black Canyon experience to be an eye-popping awakening. The vistas are in constant flux and it is fascinating to watch the light change throughout the day. We were here on a nearly cloudless day, so the canyon walls were rendered brilliantly. Part of me really wanted to explore the bottom of the canyon, but it is basically inaccessible to all but the most intrepid hikers and climbers, via a trail system that is not managed. Even more unlikely would be a trip down the Gunnison through the canyon. Class V rapids abound, with many extremely treacherous portages. Suffice it to say, the canyon is best viewed from the relative safety of the rim.

We did take one managed trail about 400 feet down into the canyon. Strangely enough the trail is called Oak Flat, but it is anything but flat. It is an awesome experience to leave the hustle and bustle of the rim road and experience the quiet interior of the canyon. One of our favorite hikes was the Warner Point trail, named for a Montrose minister that rallied to have the canyon preserved in the 1920’s. From the end of the point one can see in all directions, with the majestic San Juans to the south, the Elk Ridge Mountains to the north, the Uncompaghgre valley to the west, and the Black Canyon to the east.

The canyon, as a raparian zone, is teeming with life. We saw many types of birds, including Golden Eagles, Magpies, a Grouse and Violet-Green Swallow, as well as a marmot. Spring is just beginning to show as well, as evidenced by several early wildflower varieties and the beginnings of cones on Douglas Fir.