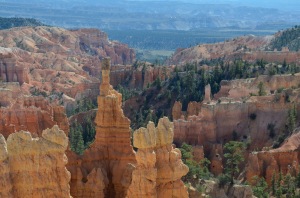 Today we returned to one of our favorite National Parks, Bryce Canyon. It is almost always cool in Bryce, for the elevation is between 8,000 and 9,000 feet. That’s a good thing. The only drawback, though, is that I always need 3 to 4 days to acclimate to higher elevations before I can undertake serious physical exertion. Mandy’s in the same boat. The last time we were here, two years ago, we hiked down into the canyon without acclimatization. We were huffing and puffing like mad and our hearts were pounding in our chests, with the slightest rise in the trail. It was well worth it, though, as the canyon is so much more magical when you go into the land of the hoodoos. 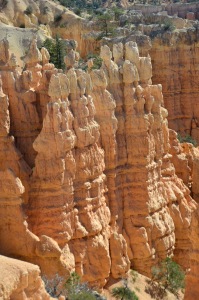 I remember back in 2005, visiting the Grand Canyon and being struck by how still and quiet it was once one leaves the bustling perimeter. We didn’t go far down the trail, but the memory of the grandeur and solitude will always be with me. The same is true at Bryce Canyon; once one leaves the crowds behind one is witness to a whole other world. Words can’t adequately describe the beauty of the landscape below the rim of the canyon. The hoodoos begin to take on an anthropomorphic presence; like being in the land of giants.

Furthering that impression, the hoodoos and other structures have a spiritual quality, leaving one awestruck and feeling very deferential towards the giant figures. People like to associate the figures with the shape of a face or an animal, such as the Queen Victoria hoodoo. I prefer to disassociate the figures from an association with something familiar and comforting, such that the hoodoos begin to emerge almost as mystical beings, with an energy all their own.

This time around, although we would have liked to descend again into the land of mystical beings, we decided to stick to the Rim Trail. We were not disappointed. One can walk along the rim for roughly 5 miles before that trail as well descends into the depths. The landscape is constantly unfolding new mysteries and visions as one makes ones way along the rim. 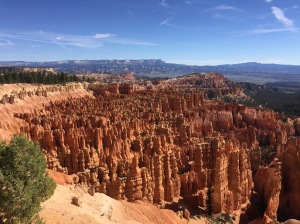 The hoodoos, arches, canyons and other otherworldly structures are interesting to see as they are different from every angle. Oh, and the colors are out of this world! There is the familiar (to the Utah desert) red sandstone in every shade, oranges and even purple. If I was a landscape painter I would love to soak in the majestic scene and render it on canvas. That said, the scene is so hard to convey in mere photographs and similarly only the best painter could convey the immensity of impressions and grandeur of it all. I’ve done my best to photograph some aspects of the canyon, but the digital image is a poor means to describe all that one sees and feels peering into that landscape.

On our first night after hiking the first half of the Rim Trail, we settled in to watch the light change the landscape as the sun set. The hues and patina of the setting changed dramatically as the light falling on it dwindled. Each moment revealed a whole new world for meditation. It was the perfect time to call one of our children to strive to describe what we were witnessing. Happily, we were able to reach Veronica. My meager words could not possibly do the scene justice, but I could describe the way distant Boulder Mountain disappeared into the ether as the sun set, or the way the shadows of the hoodoos stretched across the landscape until all was united in darkness. Even in darkness, though, the figures were omnipresent. I felt like we were surrendering once again to Nature’s majesty. The icing on the cake was the star-spangled skies in the clear mountain air, so far away from any settlement. I’ve read recently that the most beautiful thing a human will ever see is Orion. I don’t necessarily agree, as there is so much to behold in this beautiful world and everyone sees beauty from a different paradigm. Nevertheless Orion and the Milky Way has a way of making me feel peace and humility at the vastness of it all. 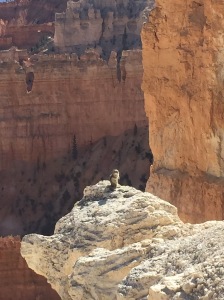