We’ve been exploring farther and farther abroad on our days off from work here at Ridgway State Park, Colorado. We were very pleased to find out that Moab, Utah is only a 3-hour drive by car, across some gorgeous country. The route takes you across a mountain pass (Dallas Divide) with awesome up-close views of the Sneffels Range, through canyons and gorges and around another big mountain range, the La Sal Range, which lies southeast of Moab. The La Sals attain 13,000 feet and are the second-highest range in Utah.

The town of Moab has about 5,000 inhabitants and is centered between two national parks: Arches and Canyonlands. The opportunities for adventure here seem endless, with whitewater rafting, extreme mountain biking, hiking, climbing, bouldering, canyoneering, horseback riding and so on. We stayed in a tiny tent-only urban campground, the “Up the Creek” campground, just off the main drag. It was very nice to hear the gurgling of adjacent Mill Creek all night. After arriving about 11 a.m. we set up our tent and headed into Arches N.P, the entrance of which lies about 5 miles north of Moab.

The entrance into Arches has to be one of the most dramatic of any national park. You drive in low in front of a series of red sandstone cliffs looming over 1,500 feet above you, in close proximity. The entry road takes off immediately up and over these cliffs, such that you soon have a commanding view of the region and feel as if you have reached the top of a plateau. Indeed, you are on the Colorado Plateau. The Colorado Plateau is a large, distinct physical region centered on the four corners region of Colorado, Utah, New Mexico and Arizona. It was once covered by an inland sea which deposited an underground salt bed that is thousands of feet thick in places. This unstable salt bed is overlaid by a mile of rock. Instability began to create faults in the rock surface. Over time these faults developed into fins of rock through the process of erosion. As erosion continued, softer rock fell out of the fins and the hardiest fins developed into arches.

We decided to drive as far as the road goes, about 16 miles, to the Devils Garden trailhead. The initial trail, to Landscape Arch, is relatively flat and easygoing. But if you want to leave the crowds behind, venture beyond Landscape Arch into the further reaches of Devils Garden. The first thing you get to do on this trail is climb a giant stairstep made of slickrock. And the rock truly is slick, due to the sand that seems to cling to every surface.

As we approached this stairstep formation, a woman coming down was actually screaming that she couldn’t make it. It is pretty intimidating coming down, knowing one false step will send you scuttling into the chasm. She took it slow and with some guidance made it down, but was very upset. She definitely needed more appropriate footwear. It is interesting that the National Park service has taken the stance that you are pretty much on your own in the wild and even not so wild portions of the parks. There are abundant opportunities for you to shorten your life in every park. Think of the incidences of people taking selfies and backing up and off a cliff. Be careful and bring the right equipment!

On the way out to the Double-O arch we encountered Navajo Arch and Partition Arch. In both place you can climb into the arch itself, which is not recommended as these formations are still forming! There was a picture at one of the viewpoints of a giant slab of stone coming loose from the underside of the arch that someone actually caught on film.

On the way to Double-O the trail goes over some very slender fins of rock with plenty of room to fall on either side. Not a trail to take if you suffer from vertigo. This was called a primitive trail, for good reason. There was a loop to go back a different way that we didn’t take and for good reason. One couple back at the start told us that they almost called it quits several times taking this trail back; it was that extreme. On the way back to camp we stopped at the old Wolf Ranch to take in some rock art. This is more recent, dating anywhere from the 1650’s to the 1850’s, after Europeans introduced horses to the Americas.

Another panel near where the road going back to Moab crosses Courthouse Wash, is a much more ancient panel, dating back 1,500 to 4,000 years. These panels often are found at confluences of rivers or entrances to canyons. This panel was unfortunately defaced in the 1980’s. Pictures nearby, prior to the defacing, show the figures and colors rendered more brilliantly. The figures in the art are very tall and mysterious. There is not a good scientific explanation for the meaning of the art. Read more here: Courthouse Wash Pictographs

Since this was kind of a whirlwind trip, we had only one day to explore Arches and one for Canyonlands. The approach to Canyonlands takes off about 10 miles north of Moab and continues, up and up, for about 20 miles to the west, towards the confluence of the Colorado and Green Rivers. This road leads into the Islands in the Sky quadrant of Canyonlands National Park. And the name is apt. You don’t get many glimpses of the rivers, far, far below, but you do get the sense that you are in some ethereal world, floating above the desert floor. The land falls away in all directions, with the vistas originating from mesas resting over 1,000 feet above the land below.

If you are very adventurous, there is White Rim Road which follows the base of the cliffs, but it is 100 miles of no water, hardpan and dust. You can see the road leading off into the distance in the next photograph. It used to serve as a way for ranchers to get their sheep to water.

This is once again big sky country, with vistas to distant mountains in Colorado on clear days. It is somewhat reminiscent of the Grand Canyon, but the scale is so huge that is hard to place oneself in that context. There is a very famous arch in the Island in the Sky quadrant known as the Mesa Arch. Photographers were clambering for their chance to stand at the mouth of the arch to take their photo since one can capture the distant canyons through the arch. If you really want to beat the crowds, arrive at sunrise for a truly spectacular photograph.

I will close with a nice shot of a gathering thunderstorm looming over the cliffs, and a distant view over all the formations. 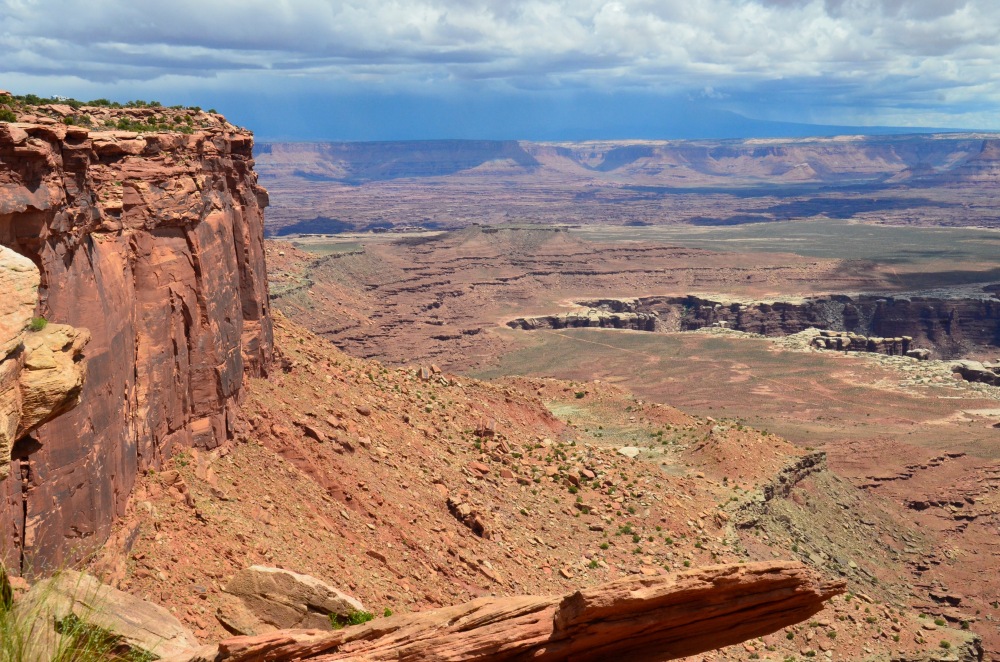 For the way back to Ridgway, we started out by taking State Road 128, which leads upstream through the canyon of the Colorado east of Moab. A truly spectacular road with few travelers. It has been discovered by canoers, kayakers, and stand-up paddleboarders.